Note! Code taken for analysis is a snapshot of Jon’s Skeet’s repository. At the time of reading this it may got changed. It doesn’t diminish the benefits though as SonarQube features are stable over time. So is code by Jon Skeet.

Note! All analysis results are available for public access here under my SonarCloud account. It’s a great opportunity to play around with SonarQube with real data.

Let’s take a look at the a single project overview provided by Sonar: 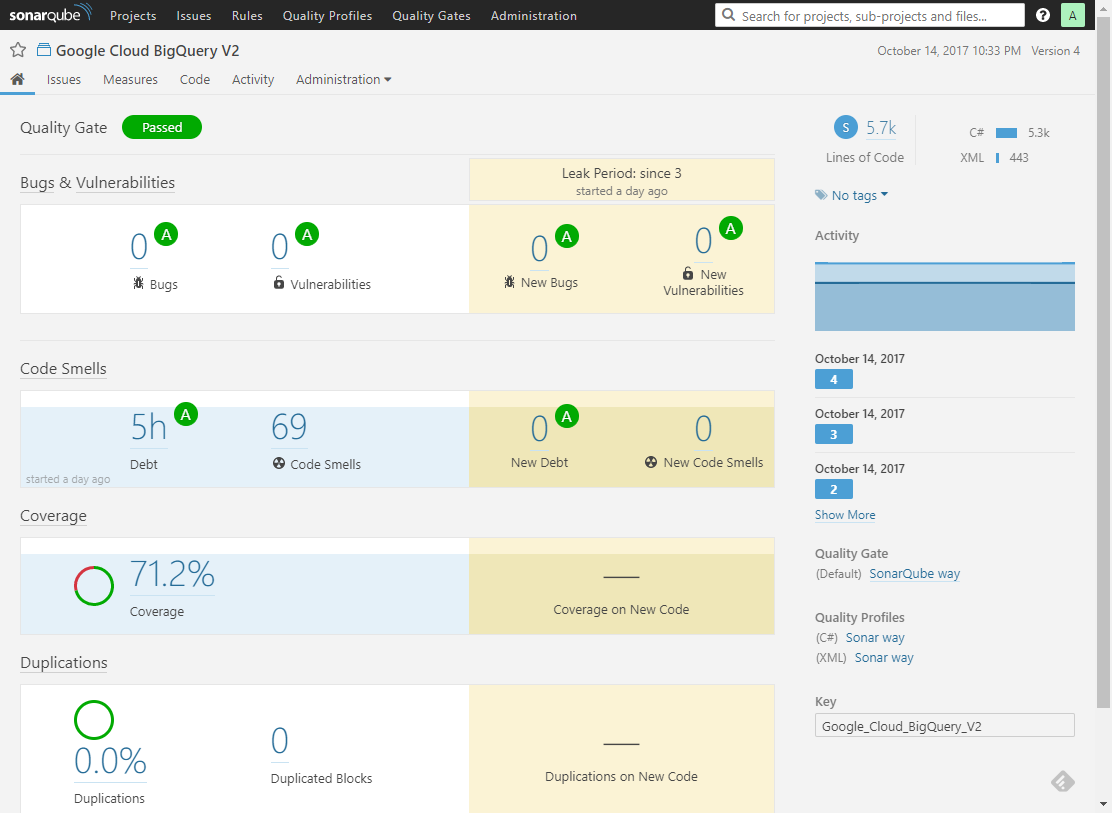 Project overview. Just a quick glance for a health check of code.

Some numbers, colors around, maybe also some cryptic titles. I’m going to describe each section in details.

Its very top contains quality status information: either acceptable (green) or unacceptable (red). This has the following meaning: under what was agreed as good-enough (acceptable) code and configured with SonarQube the codebase has either all those properties or not. This is vital in CI/CD scenarios when it may immediately block the pipeline execution.

Little below, there are four sections, namely:

Each of them sums up the fundamental measures belonging to the specific area. You may wonder what that colorful A-F classification represents here. These basic score labels help you quickly assess the health status across various project dimensions and compare multiple projects with each other.

Each section is divided into two columns. The left one stands for overall status for the whole project codebase. The right column is filled with analogous information, but considering only the leak period, meaning only new/changed code from the last analysis was taken into consideration. So, doing the analysis regularly, one can clearly determine who and when improved or degraded code quality. Also, a CI/CD pipeline can act upon code changes and e.g. block unacceptable increment. Imagine you work on a a project with high technical debt (sadly, that doesn’t require sophisticated imagination as most of us do) and only recently company started a remediation effort. Then, focusing on leak periods is vital for blocking new bad code while struggling towards decreasing technical debt on the whole.

If two or more analyses were performed for a given project, it would contain sections with charts rendered in their background. This is a sort of timeline for a given characteristic of the project. Sections present only the most important measures. More details, drill downs, advanced visualizations specific to areas etc. are available in corresponding tabs on the top just below the project name. A selection of them is presented later in this article.

Now, the panel to the right. Starting from the top:

Every issue reported by Sonar has its rule counterpart. In fact, every analysis loads a ruleset from the server and then files containing code are examined for rules violations. If found, an issue is reported. Consequently, various metrics (e.g. reliability, security, maintainability) are built upon the issues outcome. You may also think about it as linter or hinter rules that are used to produce warnings in your IDE every time you’ve written suspiciously looking code. 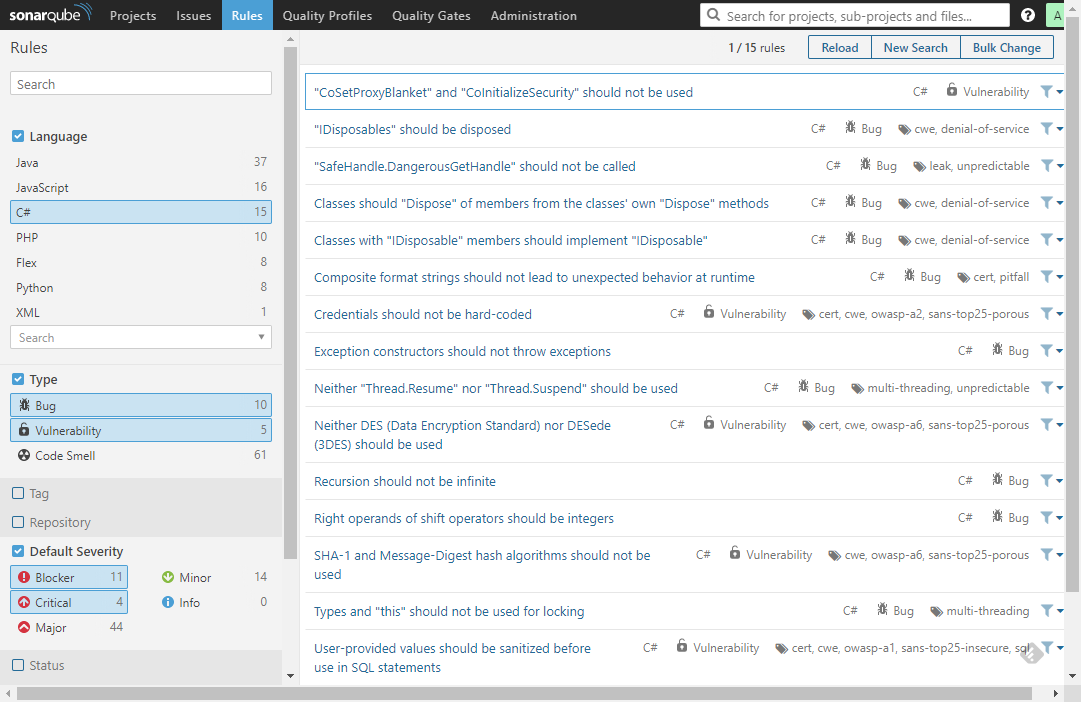 The picture above presents 15 most severe C# rules. To the left - as usual, search and filtering options. If you click one, its details will show up. In there:

Each rule can be assigned a profile. Check out Quality Profiles tab where you can quickly recognize that they’re just a named bags for rules in particular programming languages.

Let’s skim through an example. In a given profile you can activate as many rules from the rules repository as you want. But how to effectively select them? You need to establish some decent consensus among all its potential users. Why? For them to cherish living with SonarQube on a daily basis ever after. Otherwise fixing noisy issues would make more harm than good. A common practice is to give people a chance to build profiles together. Another one - start with a strict rule set and gradually exclude ones that are more limiting than beneficial. This is easy when the scope is one team. What about the whole organization? Having a common policy is good, but the downside is that everyone needs to comply. SonarQube leaves the final choice to you.

Quality gates are there to make final decisions - whether to accept or reject the whole analysis. They consist of criteria that are examined against the metrics of the code being analyzed. Its binary output enables a properly configured CI pipeline to continue or stop. The effect is that the whole team or organization can sleep well and assume code entering the main branch of development meets the quality bars. The offender usually repairs defects and saves human reviewers time.

In SonarQube the basic metric of code quality is: correctness. Does it mean Sonar can do mathematical proofs for you? No, correctness here is meant for indication that no clear evidence (symptoms, code patterns etc.) of invalid constructs is found. 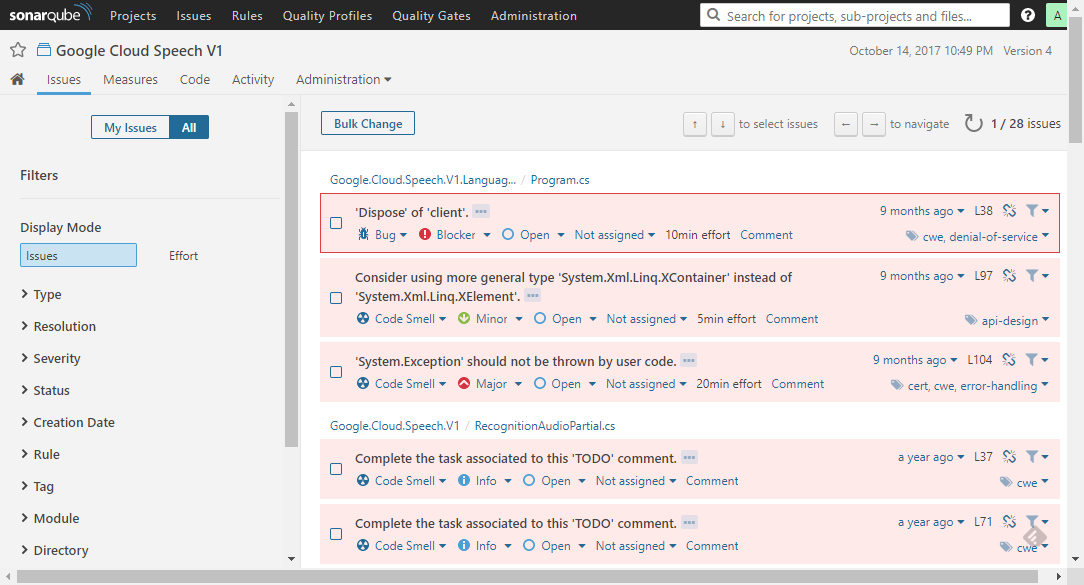 Under the Issues tab in the detailed view of a project you can search for issues reported. Each can be assigned a person to work out a resolution (a fix, won’t fix, false positive etc.). Even automatically as git blame makes perfect work in this forensic science. My Issues filter is recommended as a daily habit. Now, let’s see an example of a serious violation - a blocking error:

An example of a blocker issue - the author envisioned that and documented well.

The navigation pane - on the left, and in the main area - the source file containing issues rendered in red boxes just below the violating line. You can quickly:

As you can see, Sonar gives you room to manually override issue properties if automatic classification isn’t accurate enough.

And when it comes to Jon Skeet’s code – well, he cautioned potential readers (Program.cs, line 26) that he favoured time over quality in that case. A deliberate decision, well documented - a good example how to proceed with tradeoffs.

Security in the era of rush

Similarly to code issues related to the correctness, Sonar reserves a dedicated category for security flaws. This is especially helpful as no profound security knowledge is required from an average developer nowadays. In consequence, it’s quite easy to commit a vulnerability which may have disastrous results for the whole company. Every little aid is vital here. So, interested what Sonar does for security analysis? There is a bunch of rules written to cover industry standards such as MITRE, CWE, CERT, OWASP, SANS, for example:

Technical debt and its economy

The definition of technical debt is out of scope of this article. Nevertheless, it’s vital to understand it well, as it’s the cornerstone of talking about code quality management in software engineering. Martin Fowler provides a brief and luminous introduction. So, Sonar gives you Maintainability measure which sums up project technical debt. In fact it’s yet again about a set of rules. This time they are classified as so-called code smells detectors. And here we have two main dimensions. First - total time needed to repair the code that slows development down each cycle. Second - technical debt as % of your entire codebase. This is particularly useful for projects comparison. Here comes a selection of interesting rules:

Now, something I like Sonar much for: cognitive complexity. What is it? A special rule that detects complex blocks of code. Though, its complexity definition differs from what most of us know as McCabe’s cyclomatic complexity. One picture and I’m pretty sure you understand (and fall in with it): 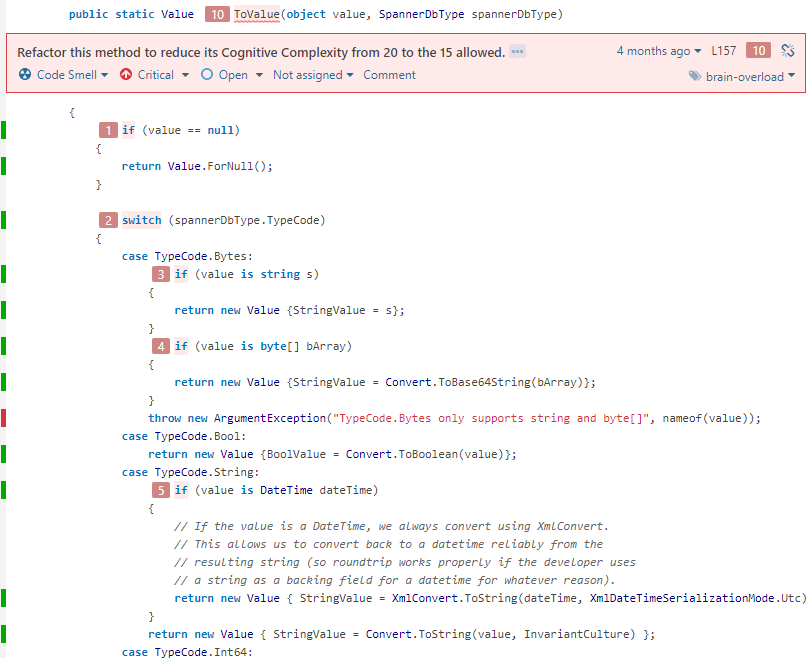 A lot has been said about importance of unit testing, TDD, 100% code coverage. While there’re numerous heated debates on the Internet, I’m not going to ask you dear reader to get familiar with my opinion. Instead of heating it all up, I present you with a Sonar heatmap example: 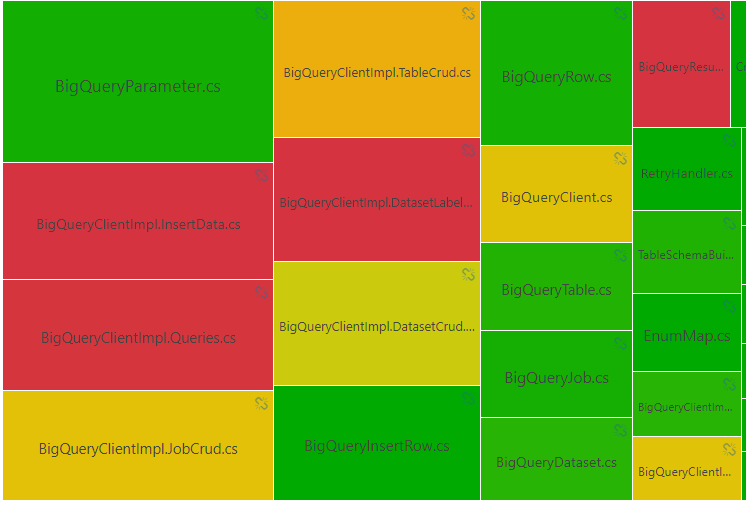 The more red, the bigger the cry for test coverage. Decision as always - up to you.

Huh, lots of Sonar capabilities covered. A project overview with most valuable metrics, issues found in each analysis, rules repository, technical debt and code coverage. For most of them we’ve just looked at the surface. I encourage you to play around in a free SonarCloud workspace with the analysis I did for the purpose of this article. You can find it here in my SonarCloud space.